I have Quicken Home & Business 2018. I’ve been using it now for about a year. I had tried Quicken a couple years ago, but was not impressed. At the time, I was using Bank of America’s online software, which is surprisingly robust, to aggregate all my financial accounts in one place. I had used Mint.com several years ago, when it was good, but I found it to be lacking when it came to tracking investment accounts. So I was on the hunt for something better.

A cloud-based option that I really liked and is quite popular right now is Personal Capital. They are sort of like Mint.com, except the product is newer and more tailored for investment accounts. I really liked the mobile app, cash flow view, and retirement planning tools. Be aware, their model is something like a wealth advisor and they try to sell you on their services once you have over $50K in assets to manage, but most people like me just use the free tools they offer. Also, fun fact, but the founder of Personal Capital is Bill Harris, the former CEO of Intuit and PayPal back in the day.

The problem with Personal Capital, for me, was that it doesn’t support Canadian accounts or multiple currencies. And there’s no indication that they will anytime soon. So that was a deal breaker. Also, somewhere in the last few months their integration with Schwab has not been working, so that was a sign their product was stagnating.

That’s when I decided to give Quicken another try. I downloaded the Mac trial and started connecting my accounts. Immediately, I was impressed. It looked fresh. It had zero trouble connecting to any of my accounts. It also had way more & deeper integrations that Mint.com and Personal Capital, which both rely on Yodlee under the hood. When I realized that it could also work with my Canadian accounts, I was blown away. It effortlessly imported transactions (I had to manually download them from my bank’s site, but still) and then distinguished the ones that were in CAD. All my reports had a nifty dropdown that let me switch between the two. And in some cases it would do conversions automatically for things like net worth calculation. Remember, this is the Mac version of Quicken!

The mobile app is also more useful than I expected. It’s not a full on cloud-based service like Mint.com is, but you can install the Quicken mobile app, which acts like a sort of companion app to the Quicken app on your computer. For me, the main thing is being able to view and categorize the transactions from the mobile app, so this definitely handles that.

A year later, I’m still using Quicken and I love it. It’s not perfect, but it’s better than anything else out there right now. In addition, I love the fact that they are continuously making the product better. Every few weeks, the app prompts for an update. It’s super cool because it shows a changelog of everything that is new, improved, fixed, and changed since the last update. 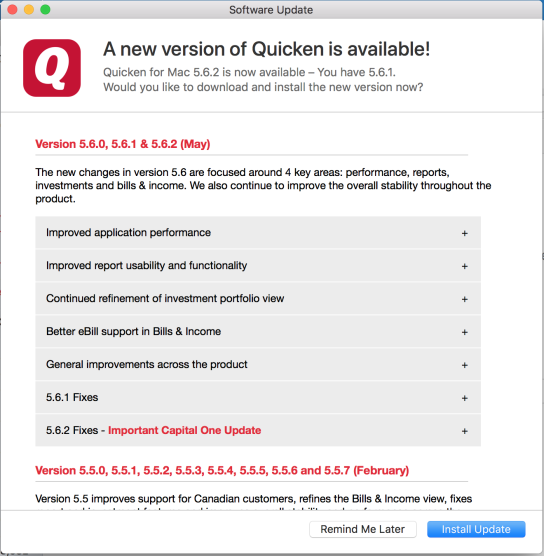 I wish more companies would do this! As a user, I really appreciate this transparency and it instills confidence that the product will continue to get better.

I became intrigued how Quicken as a product was able to turn itself around so much in such a short time. I did a bit of Googling and learned that in 2016, Intuit spun out Quicken into is own company. Basically, after years of neglect by Intuit (the parent company), Eric Dunn (the head of Quicken, and employee #4 at Intuit) got together with some of the key employees and found a private equity firm to buy the company out. Now it is independently run by them. Soon after the buyout, Eric said:

“I think [users] can be completely confident that Quicken will be there for another 30 years,” Dunn said. “In a couple of years from now, I hope they say, ‘Wow, this is the best Quicken ever.'”

Well, it is the best Quicken ever. So what did they change? Basically their strategy focused on making the product better. Modernizing the UI, moving to cloud-based syncing, finally investing in the Mac app to bring it on par with Windows, and moving to a subscription model similar to Office 365. You can see the original announcement from Eric 2 years ago here. He even mentions hiring a product manager for the Mac app 🙂

If you ask me, Quicken is doing an excellent job so far. Whatever they are doing is working and the product is improving faster than ever. Kudos to the team and keep up the good work!

View all posts by Kurt Heinrich

One thought on “Quicken is killing it”